Valencia welcomes in Spring with the Fallas. During the months proceeding this unique spectacle, a lot of hard work and dedication is put into preparing the monumental and ephemeral cardboard statues that will be devoured by the flames. The festival has been designated as a UNESCO Intangible Cultural Heritage of Humanity since 2016.

The Fallas are Valencia’s most international festival. In a competition of art, ingenuity and good taste, during the week beginning on 19 March the city fills with gigantic cardboard monuments, the ninots. The celebration’s origins go back to the parots of the carpenters: a wooden lamp that was used to light the workshops in winter and was burned in the street on the eve of San José’s Day. At first, they were given a human appearance by decorating them with old clothes, but in the mid-19th century, they started making them bigger and taller and improving their forms to convert them into decorative dolls. 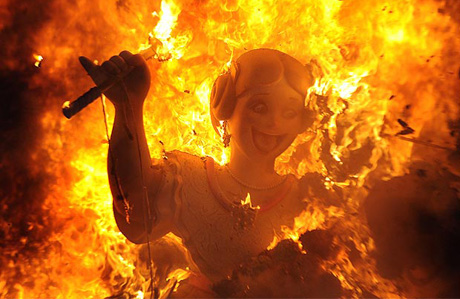 Although the most important events are held during the week beginning on the 19th, Valencia starts preparing the festivities on 1 March with the mascletás, the firework displays held every day at 2 pm at the Plaza del Ayuntamiento. Finally, the night of 15 March arrives, when the traditional plantà of fallas takes place. Work goes on all night to install the more than 700 figures in the city’s streets and squares. Some are even begun to be set up days beforehand, as these enormous statues can reach up to 20 metres in height. On the morning of the 16th, Valencia dawns inhabited by caricatures and satirical representations which, with great sense of humour, criticise politicians, celebrities and the most significant current events.

These impressive scenes can be enjoyed during the following days until, on the night of the 19th to the 20th, the cremàtakes place. This is the moment when they are burnt amid a fascinating spectacle of light, music and fireworks All are burnt apart from one ninot which, chosen by popular vote, is saved from the flames to join the collection of the Fallas Museum. Another of the most emotional moments of the Fallas is the floral offering to the Virgin Mary, when the Falla committees parade on 17 and 18 March and in honour of the patron saint form a 14-metre-high mountain of flowers. Open-air celebrations, parades, bullfights, competitions and other entertainment events complete the programme of these festivities.